A good bartender can make or break a bar, as the balance of charm and expertise are essential components to a good night out. But is that always going to be the case? As we get better and better at developing robotics and AI systems, will bartenders be at risk of being replaced?

The short answer is in the short term absolutely not. But there is an arguable use case for robotics in bartending that needs to be considered.

First robots are expected to hit the market in early 2019. Yanu will initially be distributed in airports, restaurants, hotels, cruise ships, and entertainment venues globally.

And that does seem to be the appeal to robotics in bartending. Having automated systems in highly trafficked areas like airports, hotels, etc. makes a whole lot of sense. Many airports already feature touch display ordering, so commuters don’t have to interact with anyone outside of receiving their food; it’s only natural that this would further transition to a fully automated experience.

These aren’t necessarily far off either. In fact, it’s fully possible to encounter a robot bartender out in the wild right now. Makr Shakr spun off as a new company in 2014, and has since installed five units on Royal Caribbean cruise ships, plus one on the Las Vegas strip. The company claims that these units have so far made more than 1 million drinks, sometimes serving as many as 800 cocktails per night. 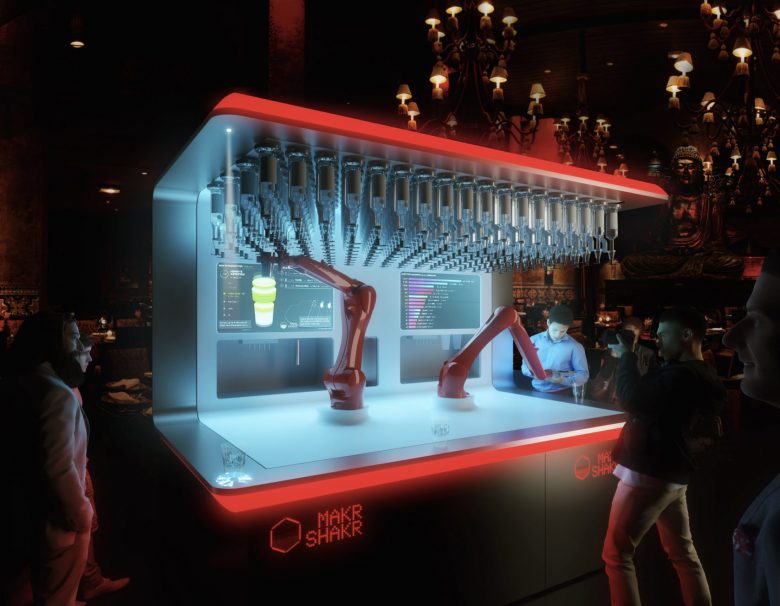 You can experience the full robot revolution at the Tipsy Robot bar in Las Vegas, which combines two robot arms with eight human bartenders to serve more than 120 drinks per hour.

These aren’t cheap investments though. The Makr Shakr for example initially ran up to one million dollars, with a newly released version bringing the price tag down to close to $120,000.

Most in the industry see robot bartenders as an interesting opportunity, and there is some future potential, especially in high trafficked areas. The earlier mentioned Yanu by Robolab just closed their second seed investment round of €650,000, and are looking to close an ICO of $10M in October, so there is big growth opportunity for the space.

What do you think? Do you think robot bartending is a novelty? Or will it be something that helps add to the overall experience?