Skip to content
This mysterious spirit remains one of the most controversial drinks even today.

What could be considered a “taboo” drink, has a long and complicated history with the public.

Absinthe has for centuries been a polarizing drink. It is either a miraculous drink, that unlocks creativity and passion or a devil’s drink that brings about a fever of madness. The polarity of Absinthe can be essentially attributed to one key ingredient: Wormwood.

Wormwood has long been used as a medicinal herb for a variety of ailments. The Greeks would soak wormwood leaves in wine or spirits, this ancient absinthe supposedly aided childbirth. Hippocrates, often considered the first physician, prescribed it for menstrual pain, jaundice, anemia, and rheumatism. Galen, a physician during the second century suggested it for stomach relaxation and as a remedy for swooning. British herbalist John Gerard wrote in 1597, “Wormewood voideth away the wormes of the guts.” And when the bubonic plague returned to England in the 17th and 18th centuries, many people burned wormwood to fumigate infected houses.

Absinthe as we know it today, originated in the Swiss town of Couvet in 1789 by Dr. Pierre Ordinaire. Dr. Ordinaire, originally from the Franche-Comté region of France, went into self-exile after the French revolution due to political reasons. While traveling through the Val-de-Travers in Switzerland, he began to combine wormwood with other herbs and alcohol and began to distill the concoction. The distillate soon became well known in the region as a cure-all and for its unbelievable healing powers. Because of its greenish tint, it became known as La Fée Verte.

Of course, like many spirits, there is another story to the origin. During the French occupation of Northern Africa in 1840’s the heat and bad water took their toll, with fever tearing through the ranks. The men received wormwood to quell fevers, prevent dysentery, and ward off insects. They took to spiking their wine with it, and of course upon returning to France they brought with them a taste for the drink, dubbing it “une verte” for its distinctive green color. And soon civilians, eager to align themselves with their newly victorious empire, began asking for “a green.”

Regardless of which origin story is accurate, Absinthe began taking hold in the French population. It was revered for it’s exotic allure, rumored hallucinatory effects and smart drinkers noticed they’d get more alcohol by volume with Absinthe, thereby saving money.

The absinthe mythology, of the Green Fairy of liberation, altered perceptions and unveiled meanings persisted through the years and generated mass appealed to the creative types. Famous names like van Gogh, Picasso, Oscar Wilde, even Hemingway all found some allure to the spirit. By the end of the nineteenth century, France alone was gulping down over 2 million litres of the liquid per year. In 1910, according to some reports, this had reached a whopping 36 million litres annually.

The popularity of Absinthe extended over into the US as well, particularly in New Orleans with its high French population. The Old Absinthe House, later renamed the Absinthe Room, was an iconic establishment with guests of the likes of presidents William Howard Taft and Theodore Roosevelt, Mark Twain, Walt Whitman, Aaron Burr, William Thackeray, Jenny Lind and Oscar Wilde.

But then prohibition happened. Not just US prohibition, but prohibition towards Absinthe on a grand scale.  in 1905, a Swiss man named Jean Lanfray murdered his wife and two daughters in a drunken rage one night.  Lanfray had been binge drinking absinthe, as well as a plethora of other wines and spirits, for days on end. It was enough for the temperance movement to grasp onto the evils of Absinthe, and this foothold began to spread. Abinsthe was banned in Switzerland first and spread through Europe, with the US following suit in 1912.

And so the spirit remained banned, for nearly 100 years! It wasn’t until the early 2000’s that countries began repealing Absinthe laws, in fact France didn’t do so until 2011. It’s this complicated history that has left Absinthe on the fringes of the spirits community, but modern bartending has started to spur a revival in the drink.

Many cocktail bars now offer the traditional means of drinking Absinthe, using a drip fountain. First, a cube of sugar is placed on a perforated spoon resting on the top of a glass of neat absinthe. Then, chilled water from a fountain spout is slowly poured over the sugar until it dissolved and the required level of dilution is achieved. Stir to fully combine and sip lightly. 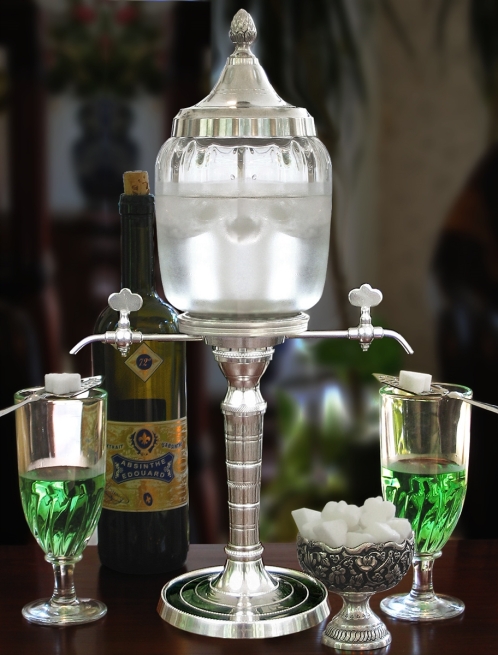 However others have found creative ways of adding in the unique bitterness of Absinthe into cocktails. There are the old classics like Hemingway’s Death in the Afternoon or the Corpse Reviver #2, but new cocktails like the Billionaire from New York’s Employees Only have added their own spin.

One thing is for sure, the allure and mystery of Absinthe isn’t going away. The spirit remains as much of a curiosity as it was over 100 years ago. So if your tempted to ride the green fairy, give these cocktails a go:

Method: Combine ingredients in a cocktail shaker filled with ice and shake until chilled. Strain into a glass and garnish with a lemon wheel.

Death in the Afternoon

Method: Pour absinthe into a champagne flute or coupe, add chilled champagne, and stir. Express a lemon peel over the top the drink and drop in.

Method: Shake all ingredients together with ice in a cocktail shaker; strain into a chilled martini glass. Garnish with an orange peel.