You may not have heard of the man, but his impact to craft beer in Canada is undeniable.

This past week, John Mitchell passed at the age of 89, this is a man whose made a significant impact on the craft beer industry in Canada and without his influence the beer industry in British Columbia would look wildly different than it does today.

John was born in Singapore in 1929, and then raised in England. In 1953 at the early age of 24, he emigrated to Canada and held a number of odd jobs as a carpenter, chef, a distinguished waiter and a bar manager at several internationally-regarded hotels.

However it was his influence as an entrepreneur and brewer that eventually established his place as the Grandfather of Canadian craft beer.

Around 1980, John felt the way many of us feel, completely fed up with the garbage beer coming from large manufacturers. The problem was they were the only options at the time due to harsh regulations and prohibition laws. Not content to leave it alone, John set about correcting this issue.

Over the course of the next two years, John fought against the status quo, pushed for reformed laws and assembled a brewhouse in Horseshoe Bay. John officially became the first person to open a craft brewhouse in Canada and called his beer the best in the country. He wasn’t wrong.

John quickly developed an international reputation and in 1984 opened Spinnaker’s in Victoria with Frank Appleton, which is still producing excellent beer to this day, including hand-pulled pints of Mitchell’s ESB. (You can read a more complete history of BC’s beer pioneers at the BC Ale Trail.)

John may not be singlehandedly responsible for the craft beer boom in Canada, but he is a significant contributing member of the foundation of this industry. Tributes to John can be found all over, including Howe Sound Brewing’s “Troller Bay Ale” which is a recreation of John’s original recipe. 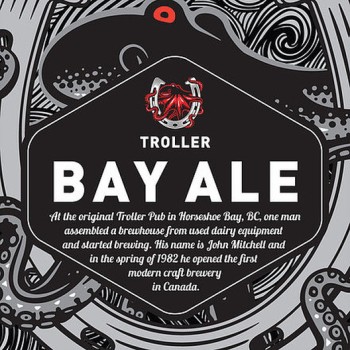 John’s love for craft beer never wained. At the time of his death, Mitchell was working with a team on a new project named the John Mitchell Legacy Pub & Brewery. Plans for the proposed new brewery, slated to continue under the guidance of one of John’s lifelong friends John Ohler, incorporate elements of John Mitchell’s brewing approach in a state-of-the-art facility.

Those who wish to honour John Mitchell’s legacy are being encouraged to send donations to the John Mitchell Scholarship. Contributions benefit the KPU Brewing & Brewery Operations diploma program, supporting students in John’s name and continuing the legacy of craft beer that John has left behind. Contact the KPU Foundation at 604-598-6005 or submit donations by mail to KPU Foundation/John Mitchell Scholarship, 12666 72 Avenue, Surrey, BC, V3W 2M8.