Cynar is the type of spirit that you’ve probably seen at your local liquor store but have no idea what it is or how to use it, let alone even how to pronounce it!

Let’s start with the easiest. Cynar is pronounced (chee-Nar) not sea-nar or CY-nar and is a classic Italian amaro. That means Cynar falls into the same category as Aperol, Campari and Fernet. Amari are a highly aromatic and often herbal/menthol/spicy/woody tasting alcohol, usually of higher ABV than wine and traditionally consumed after dinner. What makes Cynar stand out from the rest is it is actually made from artichoke!

The history of Cynar doesn’t go as far back as you may think. Cynar was actually created in the ‘50s, by a Venetian businessman named. Molle took a blend of artichoke leaves and carefully selected 13 different herbs to infuse into an alcohol base. The name is derived from a property found in artichokes, cynarin, which is believed to have digestive properties; modify taste buds to make food or drink subsequently consumed taste sweeter; and, legend has it, contain aphrodisiac characteristics. 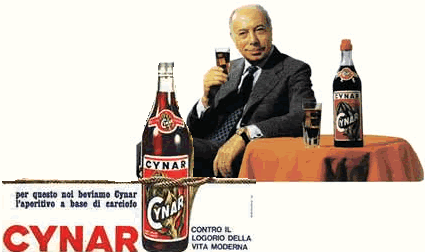 Side note: Molle himself was a bit of an interesting character. He was well known as an Italian playboy. He was involved in the invention of the Italian electric car and had six children from six different women. At the age of 90, Molle died and left his entire fortune to his secretary.

In 1995, Grupo Campari acquired the brand and have been exporting it globally ever since. Cynar is quite popular among the European crowd, but it hasn’t quite translated to a North American audience, unless you’re a bartender or someone with a penchant for bitter liqueurs. Which is actually quite a shame, as Cynar makes for a great addition to cocktails, and generally runs much cheaper than its cousin amari.

The reality is the artichoke doesn’t come through as much as you may think. In fact Cynar is sweeter than other amari, with the nose reminiscent of a herb garden in full bloom. The flavors themselves are slightly bitter and quite herbal with a touch of sweetness.

So how should you enjoy Cynar? Traditionally you can enjoy Cynar on its own or on the rocks, but one of the classic pairings is Cynar and soda. You can also substitute Aperol for Cynar in an Aperol Spritz and end up with a cocktail that has much more herbal flavour than the traditional version.

Bartenders have also come to love Cynar, and have created some really interesting concoctions. If you’re adventurous, go ahead and try the one below.

This cocktail was first featured on an early menu at the Violet Hour in Chicago created by the resident bartender Stephen Cole. It has since expanded to bar menus all over North America, and is a great representation of Cynar’s flavour profile.

Method: Stir all the ingredients together in a mixing glass with ice until chilled. Strain into a rocks glass over a single large ice cube and garnish.