While beer pong may be the ubiquitous drinking game that everyone basically knows how to play, it does require a few key ingredients that some may not have (long table, ping pong balls, a million solo cups). So in that case, there are some other drinking games that can be played that are just as fun as beer pong.

An honoured Oktoberfest tradition, Hammerschlagen is best played before things get too sloppy. Everybody starts with a nail in a stump. You take one swing at your nail with the wedge side of the hammer, then pass the hammer to the next person, and so on around the stump. If you miss your nail, you drink. The first person to finish gets a free drink, while the last has to buy the next round.

Pretty self-explanatory. Grab a Jenga game and write a number of different rules on the tiles “take a drink”, “give out two drinks”, etc. Players must do whatever the tile they pull says, if they topple the Jenga tower, they instantly have to finish their beer.

Okay this one gets a little messy. Everyone leaves the room with the exception of one person, who you can either randomly choose or play a game of rock, paper, scissors to decide. That person takes a beer for each player and shakes one extremely hard. All players then come back into the room and choose one beer from the pile. The player who gets stuck with the explosive beer has to chug while basically getting sprayed with the contents.

You’re going to need a lot of shot glasses for this. Players take 16 shot glasses and fill half with vodka and the other half with water. Then a non-participating person arranges a 4×4 board of the shot glasses on a table. Players take turns choosing a random glass until the entire board is cleared. Works best with an even number of players.

To set up King’s Cup, set an empty glass in the center of a table. Spread a deck of cards with the jokers removed around the glass, forming a circle of cards.

Players gather around the table, each with their drink. To begin, the first player draws a card. Each different card has its rules. However, one important thing to remember about King’s Cup is that the rules are fluid. Many groups have their set of rules for different cards. For example:

Ace: Everyone must drink until the player who drew the card stops drinking. It is up to the player as to whether or not everyone finishes their glass or just takes a few sips
2: The player can tell any other player to drink
3: The player must take a drink themselves
4: All female players must drink
5: All male players must drink
6: Everyone must touch the floor. The last player to do so must drink
7: Everyone must point towards the sky. The last player to do so must take a drink
8: The player selects another player who has to drink every time they do. This lasts until someone new draws an eight
9: The player says a word. Going around the table, each player must say a word that rhymes with it. The first player to fail to do so in a quick manner must drink
10: If a player draws a 10, they say something that they have never done. If other players have never done it either, they don’t have to drink. However, any player who has done the thing in question must drink
Jack: The player makes a rule that must be followed for the rest of the game
Queen: The queen is a wild card. Groups are encouraged to create their unique rule for the queen
King: When a player draws a kind, they pour half of their drink into the center cup. When the final king is drawn, that player must drink the entire cup 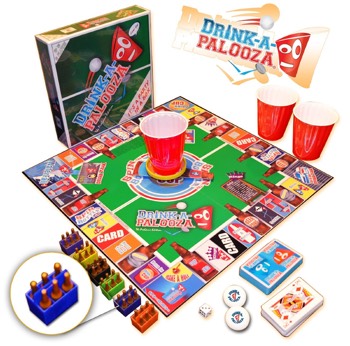 If you like a little structure from your drinking games then there’s this board game designed to help. Drinking games included here are beer pong, quarters, make a rule, kings cup, flip cup, socials, waterfalls, high / low, steal a bottle, drunk tank, booze your turn, and pour in drink cup.