January 24th is National Beer Can Appreciation Day, and so in celebration of this auspicious day we’ve pulled together a collection of beer cans that most definitely should be celebrated both for the can, and for the beer inside!

Honestly this entire post could just be about Collective Arts Brewing. The brewery is founded on principles of fusing craft beer, emerging artist and musicians into one beautiful masterpiece. Each can series is an original design by a handpicked artist, and the artwork manages to be creative and descriptive at the same time.

Powell Street used to do everything in growler or bomber bottles, but since they embraced cans, their entire aesthetic has blossomed. Core beers, and special releases all get these fantastic, bold designs that definitely make Powell stand out on the shelves. 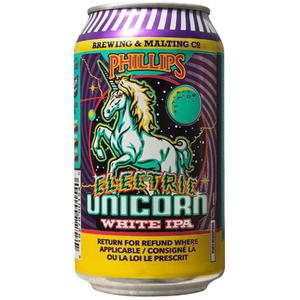 We’re highlighting this one particular beer from Phillips Brewing because of how totally epic the design is. The Electric Unicorn White IPA smacks you in the face with rad 80’s vibes. Where else are you going to get a beer featuring a space unicorn shooting lasers from its eyes?

Alberta’s Apex Predator Brewing came out with a limited series of beer based on villainous characters and the artwork on each can was justifiably appropriate. Beers like the Veruca Salted Brownie Oatmeal Stout not only looked cool, but tasted great as well.

Sometimes clean designs speak louder than anything else. That’s certainly the case with Four Winds and their beautiful Notus series of cans that feature clean geometric shapes and lines. These are instantly recognizable while staying true to the original Four Winds brand and design.

Speaking of minimal design, Port Moody brewery Twin Sails has fully embraced the minimalist look in their can series, and it works incredibly well for them. For those in the know, they are instantly recognizable and the simple design helps inform exactly what beer is inside.

Arguably one of the first breweries to champion the artists can design on the west coast, Superflux brewing doesn’t even have their own location (yet) but has somehow managed to establish a standard for both artistic design and minimalism that many brewers have worked to emulate over the years. If Collective Arts is the artistic leader on the East Coast, Superflux is the gold standard on the west.