When most people think of traveling to Mexico they think about the typical sandy beaches and all-inclusive resorts that line both coasts. While that’s all well and good, there’s an exploding culinary scene happening inland, one that would surprise even the most critical food and cocktail connoisseur.  Quite frankly, Guadalajara is one of the most creative food scenes on the planet right now.

It wasn’t always like this, in the past Guadalajara was known for earthen ceramics and mariachi bands, not exactly a creative oasis. But things started changing, with artists, chefs, architects and designers discovering a city ripe for innovation. Being inland also means Guadalajara has immediate access to fresh vegetables, meats and of course the nearby agave fields and the world-class tequila produced within.

This combination has led to some exciting bars and restaurants teeming with new flavours.

Hueso means ‘‘bone’’ in Spanish, and as the name implies, the interior walls of this restaurant in a restored 1940’s Modernist house in Colonia Lafayette are littered with more than 10,000 animal bones. While this may sound gaudy, it actually takes on this surreal quality and feels incredibly minimal despite the excess.

The approach to food and beverage is just as bold. While it is fairly meat heavy, as to be expected with a restaurant named “bone”, the dishes are prepared with precision and offers a range of unique flavours like mole octopus, lamb, duck, braised beef and the like.

On the complete opposite end of the spectrum from the polish of Hueso is this small mezcal bar which leans into its eclectic style hard. There’s a mural of a retro tour bus, a D.J. whose stylings float from electronic to mambo and of course a dedicated bar serving dozens of varieties of mezcal. The literal name of the bar is “Stop suffering. Drink mezcal” and there are bottles from all over Mexico to sample. This is a lively spot, and one that allows you to dip your toes into the nightlife of Guadalajara without diving in head first. 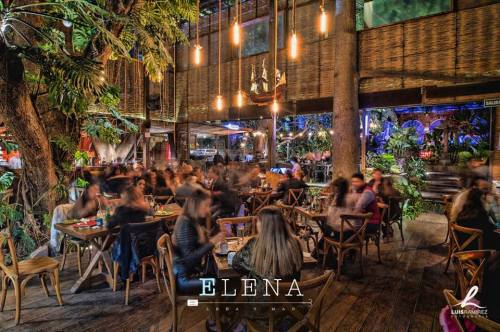 Just because Guadalajara is inland, doesn’t mean chefs aren’t making good use of the oceans on either side of the country. Elena is a beautifully lush restaurant focused on seafood, much of which is slow cooked over a wood fired grill. As with Hueso, the grilled octopus is an absolute delight and pairs exceptionally well with any number of their made-to-order margaritas (top shelf tequila of course).

Just a few doors down from Elena is Cerveceria Union, a cozy spot to kick back and order a couple of pints of craft beer produced in Mexico. While you can still order familiar options like Goose Island, I highly suggest trying any of the number of artisanal beers on the menu, which can range from light lagers, red ales and yes even some stouts. Mexico is producing far more than Corona and it’s worth getting to know some of the smaller breweries on offer.

Nestled in the arts district of Tlaquepaque, Casa Luna feels as if you’ve walked into a fairy tale ala Alice in Wonderland. The beautiful dining area is adorned in glass sculptures, fresh flowers and garden fountains; there’s so much light and earthiness, you’ll have to remind yourself that you’re sitting inside and not out.

The food and drink is just as delightful, like the hot stone bowl queso or the cocktails served in intricately designed bowls.

Taking a break from the city is as easy as hopping on a train for the day. With the agave fields just over an hour outside the city, there are a few train tours that will lead you right to the heart of tequila. Herradura Express is the best of the bunch; not only do you relax in luxury and have cocktails and food catered on the way, but you are given a full tour of the region’s sole remaining working hacienda, established in 1870. One of the  highlights is a walk through la taberna, the original 19th century distillery that remained in operation until 1963 and is a window into the past, and provides context to the significance of tequila production to the region.

Lastly, a trip to Guadalajara would be incomplete without a visit to the Hospicio Cabañas, a UNESCO world heritage site and the home of a superb series of murals, now considered some of the masterpieces of Mexican art. They are the work of José Clemente Orozco, one of the greatest Mexican muralists of the 20th century. Beyond Orozco’s striking murals, there are a number of rotating modern art exhibits and is truly a pleasure to roam through its various courtyards and walkways.