Chances are unless you’ve been to the Dominican Republic, you’ve likely never heard of Mama Juana, but it has an interesting history that’s worth exploring.

First off, it’s worth explaining what Mama Juana actually is. Mama Juana is a concoction that is a combination of red wine, rum and honey that is allowed to soak with herbs and tree bark. The taste has been referred to as similar to port or Amaro, generally runs around 20% alcohol and pours a deep red in color. But, Mama Juana’s reputation goes far beyond that of a port-like alcohol.

The history of Mama Juana possibly out dates even rum in the Caribbean. You could even make the case that Christopher Columbus made a version of Mama Juana when he mixed European alcohol with the Taino indian’s herbal tea. But as far as commercialization, Mama Juana officially came into production in the 1950’s. Jesus Rodriguez popularized Mama Juana as a herbal medicine that could rid you of the flu, aid digestion and circulation, and cleanse the blood, liver and kidneys. Oh, and of course it was strongly hailed as a powerful aphrodisiac.

As the belief of the aphrodisiac properties grew, many people started making home versions of the tonic, causing then President Trujillo to control the production and sale of Mama Juana, which actually ended up legitimizing it. It certainly helped that many famous Dominicans purportedly drank Mama Juana including  Porfirio Rubirosa, the famous Dominican playboy, polo player, race-car driver and secret agent (seriously look this guy up, he’s like a cross between Hugh Hefner and James Bond).

While Mama Juana is typically drank as a straight shot, interest in the product has started to take hold with bartenders looking for unique cocktail ingredients. In recent years, the consumption of Mama Juana has seen a sharp rise, with commercial brands becoming available in the Dominican Republic and internationally. Ready to drink brands such as Karibú, Tremols and Kalembú can be purchased in duty-free shops, resorts and liquor stores while premium brands, such as Candela, are exported and sold internationally.

If you’re interested in the spirit, it’s available online and through some speciality retailers. Here are a couple recipes to try out that showcase the uniqueness of Mama Juana:

Method: Mix all ingredients into a cocktail shaker with ice. Shake and pour into a old fashioned glass. Serve with cherry garnish 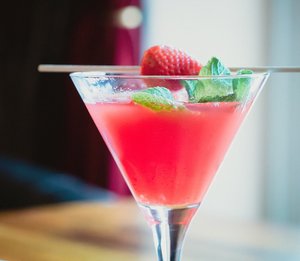 Method: Combine strawberry puree and Mama Juana in a chilled cocktail glass. Top with prosecco and garnish with mint leaf.