Hey guess what? While you’re still thinking it’s barely fall, Central City Brewing has already set its sights on the holiday season and gone ahead and announced the much anticipated craft beer advent calendar for 2017.

Update: Find out the contents of the pack here

Partnering with Parallel 49, this year’s theme is “The Great White Wonder Adventure Pack.” The pack will hit liquor stores in BC, Alberta, Saskatchewan, and Manitoba in late October (seriously!). Offering numerous styles from strong beers to lagers and everything in between, there is something for everyone in this highly-sought-after mixer pack. If you live under a rock, this is the fourth year Central City has released a holiday pack and like a traditional advent calendar, each date in the Great White Wonder Adventure Pack reveals a new beer that is kept secret until the day it is opened. 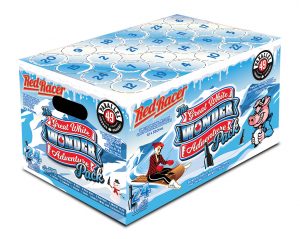 While both Central City and Parallel 49 are keeping tight lipped on the contents of the box, each brewery has 12 unique beers included which range from IPAs and Belgian Ales alongside Wheat Ales, Sours and much more.

Of course there are a number of upcoming events to support the pack launch. In addition to several tap takeovers around Vancouver, Central City Brewers + Distillers will be co-hosting a launch party for the Great White Wonder Adventure Pack at their Beatty Street Brewpub on Thursday, November 2nd, 2017 at 4:00pm. Parallel 49 Brewing will also host a launch event at their Street Kitchen location on November 15th, 2017 at 4:00pm. There is no entry fee to either one of these public tap takeovers.