August is one of the hottest months in Vancouver, and with the hot weather comes long days at the beach and on the patio. BC’s craft breweries have upped their game this summer and have released some of the most creative seasonal summer beers to date. Many of these are crisp, flavourful and light on alcohol so they can be enjoyed throughout the day.

Here are five BC craft beers that are an absolute must try, before they are gone for the season.

This sessionable summer sipper features pomegranate and passionfruit, topped off with Steamworks’ recent Kettle Sour to create a refreshing new take on the perfect patio beer.

Brewed specially for CANcity, the canned beer festival, this is a refreshing sour ale with a strong splash of cucumber. An excellent beer that is easily drinkable, here’s hoping this becomes a regular for Hearthstone.

Refreshingly bold, with a bitter edge and tonnes of flavour, this Galaxy hopped brew has the wheat base and spicy notes of a Belgian Wit. A beer that is both fruity and spicy, this adds a little more kick to the season than a simple Wit. 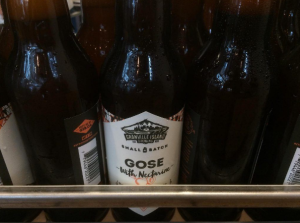 Granville Island’s Brewmaster Kevin Emms has been producing some excellent small batch beer lately. The most recent, a nectarine Gose is crisp like a cider with ripe fruit notes from real nectarines that offset the tartness of this rarely brewed German ale.

This very unique sour has been conditioned in a mix of American and French oak wine barrels for a year, creating a dry, sour and funky profile that will continue to evolve for a very long time. This 2016 version showcases the maturing character of the barrels and the tart, fruity depth of a Flanders Red.